I have always loved wildflowers. I look forward to early spring in Texas when the bluebonnets bloom! I have a sweet picture of my granddaughter sitting in a field of bluebonnets out near Round Top, Texas. This is a wonderful tradition with many Texas families. Mrs. A.L. Morgan wrote in a 1941 article in Texas Parade that spring is “when the sky falls on Texas” due to the  bluebonnet bloom.

The bluebonnet is our state flower in Texas. They are also called buffalo clover, wolf flower, and el conejo (Spanish for “the rabbit”). Some say bluebonnets are to Texans what the shamrock is to the Irish. The Indians have stories about them and the Spanish padres use to plant them all around the missions. You can find them growing wild all across south central to north central Texas mainly in the Blackland Prairie and Edwards Plateau. They are planted extensively along roadsides in Texas and Oklahoma, but two species are actually native only to Texas. 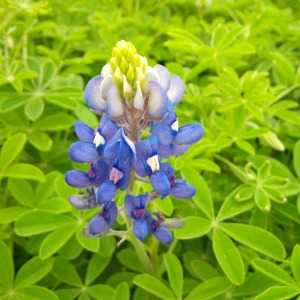 The Latin word lupus means wolf and bluebonnets were once known as wolf flowers because they were thought to devour the soil. This was because they could be found growing in thin rocky soils where other plants would not grow. Research found that quite the opposite is true. Rhizobium a nitrogen- fixing soil organisms is a bacterium that lives on the roots of legumes in a symbiotic relationship. Bluebonnets are in the legume or pea family along with clover, alfalfa and vetch.  The bacterium colonizes on the roots giving the plant nitrogen which it takes from the air and the plant gives the bacterium life support. This is a clean source of nitrogen that contains no salt or chemical toxins like you find in commercially manufactured sources. Because lupines are able to live in soil depleted of nitrogen certain species are used as cover crops to fix nitrogen back into the soil as a agricultural practice. Bluebonnet plants with the help of the bacterium produce as much nitrogen as soybeans, which often yield as much as 100 pounds of nitrogen per acre. Bluebonnets are deer resistant unlike clover and very cold tolerant and rarely bothered by freezing weather.

If you want bluebonnets in your garden you need to sow the seeds in the fall, October is best. The seeds will need scarification. This means scratching or nicking

their hard seed coat to simulate natural weathering. One method of scarification is rubbing the seeds on sandpaper. This will help the seeds germinate more quickly. They need regular watering for several weeks, especially if the weather is dry.  Here is more information on growing bluebonnets from Lady Bird Johnson’s Wildflower Center – http://www.wildflower.org/howto/show.php?id=1&frontpage=true

Field of bluebonnets at Treesearch Farms

According to Texas A&M Texas actually has 5 state flowers.
1. Lupinus subcarnosus, the original champion and still co-holder of the title, grows naturally in deep sandy loams from Leon County southwest to LaSalle County and down to the northern part of Hidalgo County in the Valley. It is often referred to as the sandy land bluebonnet. The plant’s leaflets are blunt, sometimes notched with silky undersides. This species, which reaches peak bloom in late March, is not easy to maintain in clay soils.
2. Lupinus texensis, the favorite of tourists and artists, provides the blue spring carpet of Central Texas. It is widely known as THE Texas bluebonnet. It has pointed leaflets, the flowering stalk is tipped with white (like a bunny’s tail) and hits its peak bloom in late March and early April. It is the easiest of all the species to grow.
3. Lupinus Havardii, also known as the Big Bend or Chisos Bluebonnet, is the most majestic of the Texas bluebonnet tribe with flowering spikes up to three feet. It is found on the flats of the Big Bend country in early spring, usually has seven leaflets and is difficult to cultivate outside its natural habitat.
4. Lupinus concinnus is an inconspicuous little lupine, from 2 to 7 inches, with flowers which combine elements of white, rosy purple and lavender. Commonly known as the annual lupine, it is found sparingly in the Trans-Pecos region, blooming in early spring.
5. Lupinus plattensis sneaks down from the north into the Texas Panhandle’s sandy dunes. It is the only perennial species in the state and grows to about two feet tall. It normally blooms in mid to late spring and is also known as the dune bluebonnet, the plains bluebonnet and the Nebraska Lupine.

“In 1901 when the Texas legislature decided on a state flower the chose the Lupinus subcarnosus. And that’s when the polite bluebonnet war was started.
Lupinus subcarnosus is a dainty little plant which paints the sandy, rolling hills of coastal and southern Texas with sheets of royal-blue in the early spring. But some folks thought it was the least attractive of the Texas bluebonnets. They wanted Lupinus texensis, the showier, bolder blue beauty which covers most of Texas and gives inspiration to many an artist. So, off and on for 70 years, the Legislature was encouraged to correct its oversight. But the wise Solons of Capital Hill weren’t about to get caught in another botanical trap, nor did they want to offend the supporters of Lupinus subcarnosus. They solved the problem with typical political maneuvering. In 1971, the Legislature handled the dilemma by adding the two species together, plus “any other variety of bluebonnet not heretofore recorded”, and lumped them all into one state flower. Among the many things the Legislature did not know then was that the big state of Texas is home to three other species of Lupines and the umbrella clause makes all five of them the state flower. And, if any new species are discovered, they automatically will assume the mantle of state flower as well.”  – Quote from Texas Bluebonnets, Texas Pride:Lore of the Bluebonnet.

For more history and lore check out the Native Plant Society of Texas article. https://npsot.org/TrinityForks/TrinityForksWeb/Newsletters/Bluebonnet_Article.pdf 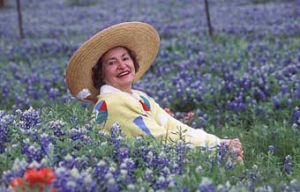 Lady Bird Johnson a shy Texas country girl who loved wildflowers and grew up to be the 1st Lady.

Wildflowers are the jewels of our state and public lands – remember to tread lightly, take only pictures and leave only memories!

© Laurin Lindsey and Ravenscourt Gardens Blog, 2014 to 2064. Unauthorized use and/or duplication of any material found on this blog, without express and written permission from this blog’s author and/or owner is strictly prohibited. Excerpts and links may be used, provided that full and clear credit is given to Laurin Lindsey and Ravenscourt Gardens Blog with appropriate and specific direction to the original content.
%d bloggers like this: